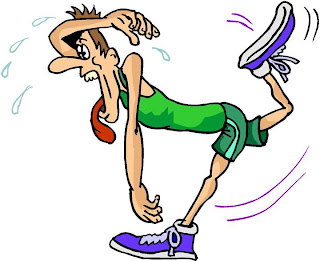 So I thought I would give blogging a try. This is similar to the idea I had 3 months ago titled “Why Don’t We Run a Marathon?”* At the time “Why not!” seemed like a perfectly viable response. After all, I’d get in good shape, spend time with the wife… how hard could it be? As it turns out, a better answer would have been “Sweet merciful crap, you have NO idea what you’re getting yourself into.” Running that far is actually really, really hard. Don’t get me wrong, for the most part I’ve enjoyed the experience. As we’ve ticked off the training miles this has seemed like a better and better idea, right up until yesterday when we ran 29km (18mi) in a little less than 3 hours and it all went off the rails.
Holy crap… running is not an experience I normally associate with pain, but trust me, the last 30 minutes of this clown parade was about redefining expectations. Expectations like “I can run a marathon”, or “I have a high pain tolerance”, or “I would fight back if a bear leapt out of the woods and sexually assaulted me”. In retrospect I was severely dehydrated (if you haven’t met me, I am a person who sweats tying their shoes), but even the lightheadedness didn’t help since it made time slow down… not exactly what I was looking for.
Eventually Erika and I managed to finish our adventure with me only screaming once in the last half mile – a personal victory if ever I saw one. I honestly can’t express the joy I felt when my watch beeped out that we were done. It could have been beeping winning lottery numbers for all I cared, I would have felt the exact same measure of elation. Of course, that kicked off 20 minutes of post run delight where our bodies essentially fell apart. Neither of us could talk, walking was a struggle, and I might have peed myself a little. Not my proudest moment. At one point when we were about 20 feet from the car it occurred to me that if someone walked up with a brick and smashed the window I’d pretty much just let it happen. I mean, honestly: When the most threatening attack you can muster is “Sweaty Hug” you pretty much have to roll with it unless the Wicked Witch of the West is trying to steal your Subaru.
Eventually we got ourselves sorted, carbo loaded, and started recouping. There’s still a month before the marathon, and while I am now classified as “moderately scared” we’re still full steam ahead. Hey, if you’re not at least a little bit scared of something you’re not pushing your boundaries enough, right? And on the plus side, this little training debacle seemed like a good story. Since I’ve wanted to write more for a while it prompted a new idea titled “Why Don’t I Write a Blog?” The natural answer of course was “Why not?”
How hard could it be?
*I should mention that the “we” refers to my wife Erika. I generally don’t refer to myself using the royal “we” unless a) it’s funny, b) I just got elected king, or c) I’ve lost my mind. And B is probably just a subset of C.
Posted by Paul_Par at 9:32 PM 5 comments: