I think that everyone who starts a blog has the same thought: “What if nothing interesting happens?” This seems like a death knell for the blog, and I think a lot of people try to do interesting things simply so that they have something to write about. Hell, I was all set to write about the marathon that Erika and I did two weeks ago… that’s interesting, right? (note… I will still write that post!)

In retrospect I think I should have been more concerned about the alternate option: “What if something interesting does happen?”
Let’s be honest, the things that happen to us unexpectedly are generally either inane, in which case we have to dress them up to make them interesting; or negative, in which case we don’t want to talk about them. Fortunately for the readers, I was born without a sense of personal shame. Just ask my wife about me walking around the house naked… she’s always yammering about “the blinds” being open. It’s just kind of a hum after a while really. The net result though is that I don’t really mind exposing things that others might be inclined to keep private, such as the grand mal seizure I had last weekend.
First some backstory: My biological father was epileptic, quite badly so, a condition that ultimately led to his death when I was very young. Neither my sister nor I showed any signs of the condition though, until 2 years ago when I started to have some problems with speech and comprehension (I’m 33 years old now, my father was diagnosed at 21). Every so often I would lose my ability to speak for a few seconds at a time and anything I tried to say would come out garbled. The same thing would happen while listening to people: they sounded like they were speaking a different language. It wasn’t all negative though. My favourite episodes would happen when I was reading and heard someone talking nearby, it sounded like they were reading the words right off the page in front of me. Now that may not sound like much fun but trust me: when you’re reading Moby Dick and a 5 year-old walks up and says “And half concealed in this queer tenement, I at length found one who by his aspect seemed to have authority”, well that’s just gonna make you giggle.
So at this point, I didn’t know what was going on and while we ultimately decided they were probably some sort of seizure they were at most a minor inconvenience. I was open about it at work, and if one happened while in a meeting I had hand signals at the ready so that someone would know to take over (thanks Schwartz and Graf!). Unfortunately this was happening quite often, sometimes 15-20 times a day depending on my stress level and sleep patterns. In retrospect it didn’t help that I was really stressed at work! I switched roles not long ago though and worked out the relationship between sleep and the episodes, so had actually gotten them down to generally less than 5 a day.
Then last weekend came. I don’t really know much about it, to be honest. I went to bed on Saturday night, then there was a period of major confusion that felt a lot like dreaming but with an uncomfortable air of reality to it. By the time I finally got my head together I was in the back of an ambulance at 4am and the EMT was saying “Paul, you’ve had a grand mal seizure ok?” Then I heard Erika, looked to the side, and saw my beautiful wife sitting there with what you would call “a brave face”.
This is the hard part folks. I will never be able to understand what Erika went through that night. It was so, SO much worse for her than for me. From what she has said, she woke up to me jerking back and forth, seizing up (not surprisingly), and smashing my jaw open and closed. Thank god I sleep with a mouthguard in, but even still I obliterated my tongue and did some serious injury to my back (see the disturbing photo below). Then I stopped. And I mean STOPPED. As in no moving, no blinking, and no breathing. Erika couldn’t get a pulse either, and I proceeded to turn more and more blue. I honestly wish I could take that memory out of her head because when I think about how I would react to seeing her like that it makes me want to throw up, and that’s just from the thought of it. She actually lived it. 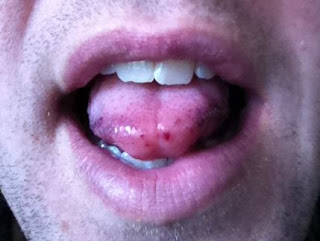 After that it was the ambulance, EMT’s, and apparently me dropping a lot of F-bombs. I don’t actually remember that part but I feel confident that every F-bomb was well thought out and valid. Hey, if you can’t drop a couple F-bombs after a grand mal seizure when can you? We went to the hospital and my brain rebooted, I got some meds, and then it was out the door with a phone number and a whole lot of questions.
When you are coming to grips with the fact that you have epilepsy it’s a strange road. I often find myself wondering “What’s that? Is that an aura? Am I about to have a seizure?” Given that I was asleep when I had mine, I have no idea what to expect. I also can’t drive until I’m 6 months seizure-free, and let me tell you that’s gonna be tough. Thank you Erika, and thank you every other person I’m going to mooch a ride from until mid-November (God willing). It’s also not something you can forget about because every night before I go to bed I take a reminder pill and think “Hey buddy… let’s you and me work together and keep my brain from freaking out ok?” On that note though, big shout-out to the folk at Abbot Laboratories: Depakote ER is the shit. Not only have I not had a grand mal, I have not had a single simple partial seizure since I started taking it (the official term for my “episodes” of non-comprehension)! That is awesome, as is the fact that I haven’t shown any side effects so far either. So fingers crossed, and maybe politics is still an option after all!
TANGENT: For a long time I have wanted to go into politics, and I thought that was an impossibility due to my episodes, for understandable reasons:
BRIAN WILLIAMS:  Mr. Parsons, you have been quoted in the past as saying that some elements of a for-pay system could be incorporated into the Canadian medical system in a manner that is beneficial to the whole. Could you speak to that position, and maybe address some of the comments by your opponents that this would amount to introducing two-tiered healthcare into Canada?
ME:  I have no idea what you just said Brian. Not a fucking clue. Was it a question about bagels? Because that’s what I think you were talking about and unless you repeat yourself that’s the question I’m answering.

So that’s my story so far. I’m going to see another neurologist soon (the first one was an asshat. Hey buddy: You see these all the time, I don’t), but that may or may not end up in a blog post. We’ll see. I want to keep these pretty lighthearted, but I needed some catharsis so if you’ve gotten this far, thanks for indulging me.
Take care folks, and give your spouse a hug.
UPDATED: Upon reading my post, Erika wanted to mention that at the time of my seizure I was buck-naked and angry, and had to be wrestled up the stairs by three EMT's who's efforts at covering me up were repeatedly thwarted by yours truly. Maybe the F-bombs weren't all me...
ANOTHER UPDATE: http://www.epilepsy.com/ is a fantastic resource, FYI.
Posted by Paul_Par at 10:46 PM 12 comments: