Confessions of a Binge Gamer

There is no higher praise that I can give a game, no greater honour that I can bestow, than to delete, destroy, dismantle, or sell it. Unload it, throw it away, scratch the DVD; just make it stop working.

Because I am a binge gamer.

I don't want to be one, but it's an unfortunate reality of my psyche. I get into a good game and the world just drops away. I lose track of time, I think about the game when I'm not playing it... it's actually a bit disturbing. I'll sit down to play a game at 8pm, then realize Erika's hollering at me to come to bed because it's 1am and she wants to go to sleep. I'm left saying "Really? Where did the last 5 hours go?"

The worst is when Erika goes away for scientific pursuits. I'll wake up on a Saturday and say "Hmm... maybe I'll play a little bit of Game X* before I get into the meat of my day. Then I proceed to play for 8 hours straight. And when I say straight, I mean straight through with no breaks. Suddenly the phone rings and it's 7pm, I'm looking away from the game for the first time and not thinking "Better get the phone"; I'm thinking "Oh Lord on high, I really need to go to the washroom" followed closely by "Holy crap am I hungry!" It's like my entire system shuts down when I'm in that state of what game designers call "flow".

Fortunately, I'm pretty well aware of this issue and can tell when it's a problem with a game. For instance, I've been playing a game on my iPhone called Dungeon Raid. It looks like this: 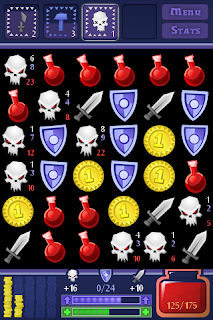 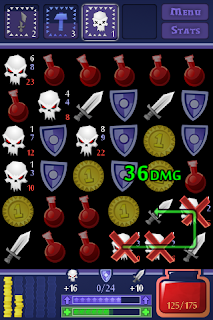 When you do that more tiles drop from the top, and you level up over time based on killing enemies: 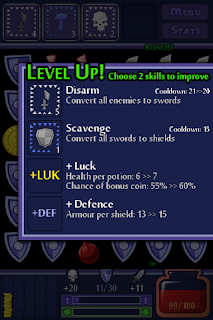 And that's pretty much it. That's the game. It goes until you die (enemies hurt you if you leave them on-screen). Sure, there's some other nuances that I'm not getting into (classes, races... other D&D things), but that's the game in a nutshell. Yet I can't... stop... playing. That's the real reason there was no post yesterday. I blew my posting time on Dungeon Raid.

Does this make me feel good about myself? Ah, no. So I have granted you, Dungeon Raid, the highest honour I can bestow upon a game. I have deleted you from my phone. Because it's a whole lot easier to have the will to do that than it is to have the will to not play you.

Now I need to find a new game. I've been hearing good things about World of Warcraft... maybe I'll give that a try?

*NOTE: Other games I have binged on include: Fallout 3, any Level 5 game I've played, Morrowind, Oblivion, All Halo titles, Portal, Peggle, Bookworm, Dynomite, Puzzle Quest, everything BioWare has made... you get the picture. And let's not forget the King of binge games: Civilization
Posted by Paul_Par at 2:01 PM