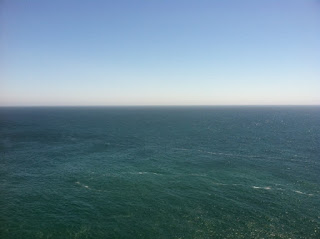 Through a combination of the weather (see above), crappy Internet availability, and not wanting to ignore Erika; I have not been posting much. I do have a nice list of topics to post about now though, and since I got up early today here's one:

It always surprises me how much meat there is on an animal. This though occured to me when looking at the shrimp we had for dinner last night. Those suckers are little more than one big hunk of meat with a head. But when you think about it, why not? Realistically what else would an animal be made out of if not guts and meat and connective tissue like bones 'n things? (name trademarked in case I ever divert into voodoo and want to open a shop)

Naturally this got me thinking about insects. Shouldn't eating a bug be much the same experience as eating a shrimp? I think it all boils down to the ratio of guts to meat. When I think of a shrimp I think of a big hunk of meat, whereas when I think of a bug like a beetle or a spider or a cricket I think of a little bag of goop. Everyone who was a kid stomped on a bug or two in their youth; it's tough to get that imagery out of your head. Shrimp are made of meat and bugs are made of guts. End of story, thanks for coming.

Or is it? After all, if I dropped a Smart Car onto a pig it's not like ham and bacon would go shooting all over the place. No, it would be the guts, just like all the bugs I stomped on as a kid. I guarantee you that if my first experiences with pig guts as a child had been in the form of Smart Car stompings instead of hot dogs I'd feel a lot differently about eating anything that came from a pig today.

So maybe there's a lot more meat on a bug than I've been willing to consider? Seems likely. Not that I'm about to do an anteater impression in my back yard with a chunk of garden hose and a fur coat, but in the right circumstance I woul now be willing to at least try an insect. With a good sauce. Like when I first tried shrimp (those suckers looked like bugs... gross).