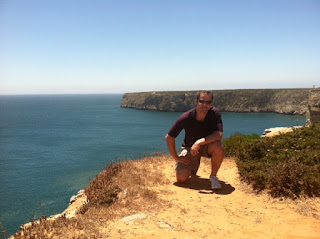 Erika and I are on the bus leaving the Algarve right now (the picture is from Sagres, we rented bikes and rode to where we took that photo. Directly behind me is a 400 foot drop straight into the ocean, great spot for a picnic!), but I thought I'd share a story from Glasgow given that I couldn't post it before due to lack of available Internet.

Erika and I had decided that we would walk to one of the parks in Glasgow (they're quite nice), then find somewhere nearby to have dinner. We wandered in the general direction of one, and at first things were fine. Shopping, touristy kinds of things going on. But then it started to get progressively more sketchy. Erika didn't seem to notice, and may have thought I was overreacting. I said as much, but she rolled her eyes in that way that says "oh come on, nobody is going to stab you in broad daylight in a major city 3 blocks from a Marks and Spencer". We soldiered on.

See of you can guess which event over the following 20 minutes led us to decide "we should get out of here before someone stabs us in broad daylight in a major city 3 blocks from a Marks and Spencer":
1. Seeing people spill out of a pub blind stinking drunk and swearing at each other, and it's 5pm
2. Stepping into that same pub and having a guy stare at me for the entire duration of our time there
3. In the pub washroom: LADY: "What brings you to Gallow's Gate?" ERIKA: "Oh, just grabbing a pint" LADY: "SURE luv... HAH!"
4. Discovering the area of town we were in was referred to as "Gallow's Gate"
5. Seeing a pigeon that I'm pretty sure had AIDS
6. Watching a drunk old man stumble and fall off the curb
7. See a different old man stumble into a bus stop ad-board, cut his head on the glass... then relieve himself on the sign