Despite my previous comments about the affordable nature of K-Mart, don’t make the mistake of thinking that impression can be extended out to Sydney at large. Sydney is hella expensive. For instance, our place is $380/week (they do everything per week here). That’s roughly $1680/month for a place that while nice, isn’t exactly the Shangri-La. Granted, we have a terrific view, but considering most of the places we saw were complete hovels for $350 I think it’s more a matter of us having gotten a great deal than anything else.

And it’s not just the housing. Pretty much everything here is more expensive than Vancouver and certainly more than Seattle. For the most part it’s not so bad though, once you commit to living frugally you can get by. Ground beef is $16/kg? We’ll eat sausage for $5 a pack. Coca-Cola is $3 for a bottle? I’ll have tea at home for 5 cents a bag. Cigarettes are $17/pack? Good thing I don’t smoke! Beer is $17 for a six pack? I guess we’ll just… wait, what?

ME: For a 6-pack of beer? Um, would it happen to be some kind of magical beer where the hops are watered exclusively with unicorn pee and harvested at midnight by pixies? I don’t need that kind of luxury, just give me the “water and migrant workers” beer, where does that get us?

BOTTLE GUY: Well, therer’s Unilever Lite. Tastes like it was filtered through a koaler if you ask me.

ME: How much is that?

BOTTLE GUY: It’s a little weak through, only 3% alcrohol.

ME: Well that’s just ridiculous, back home we use that for mix. What’s the unicorn stuff clock in at?

You have no idea how weak the beer is here. In all fairness, for a mere $17.95 you can get a 6-pack of beer that’s 4.8% alcohol, but the majority of it is 3.5%. I told them that it wasn’t uncommon to see 5.5% at home and they looked at me like I was asking where they kept the rubbing alcohol. Clearly beer is not going to be part of the day-to-day rotation for Erika and I, and hard alcohol is right out of the question. The crappiest vodka you can find is $30 for 700mL (when you buy two at once) and you have to mix it with a dollar’s worth of 7-Up per drink. It’s even worse at a pub or restaurant - check this out: 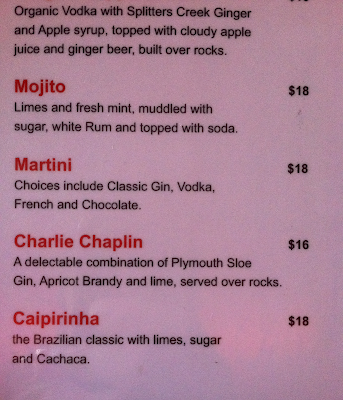 Don’t expect a classic USA overpour either, they’ll measure that thing out like it’s a uranium shipment to North Korea.

Which understandably leaves us in a bit of a pickle. What are two forlorn globetrotters to do when accosted by high priced liquor on a small bankroll? Enter this bad-boy: 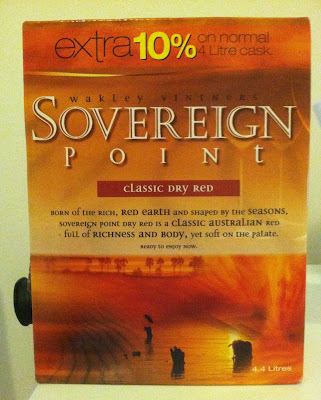 I would assume that at this point you, the reader, are wondering “What might a box of wine like this cost? Surely a classic dry red which is full of richness and body yet soft on the palate would be at least $50?” I concede your argument, but it is less than that.

“Certainly it couldn’t be less than $20? Below that a merchant would feel too deep a sense of personal shame to sell such a product!” 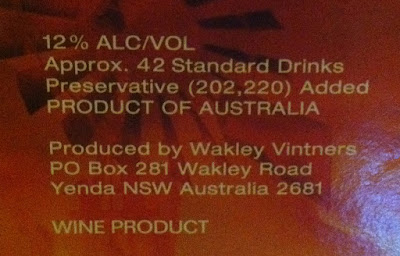 Well then, that’s $0.31 a glass! This means that beer is 864% more expensive than the delicious boxed wine I brought home one sunny Sunday afternoon. That said, I guess “delicious” is a subjective term. When we first had a glass Erika was unhesitant in her judgement:

You see, Erika had forgotten the fundamental law of tastiness:

Once reminded of this fact, Erika quickly came around: 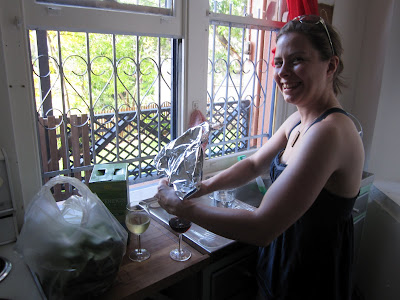 Yes, that’s her squeezing the last dregs of the wine bag like it’s the udder of the mystical beaux vine, patron animal of poor-assed drunkards. And is a whole lot more affordable than unicorn piss!
Posted by Paul_Par at 4:15 PM