Did I ever tell you about the time I dropped my asshole off a cliff? More on that later.

We’d also been told that they were an awesome must-see but we really didn’t know why. It had also been noted that when they say “Blue Mountains” what they actually mean is “Blue Hills” by Canadian standards, so in general we expected to be underwhelmed by the scale of things. With that in mind, off we went.

It was wet, and apparently far wetter than it normally is, which is to say that it was Vancouver wet. The morning we left it was actually raining so hard in Sydney that we didn’t bother leaving for several hours, so I guess the fact that it was wet in the Blue Mountains hardly qualifies as surprising.

We stayed in a place called Wentworth Falls at a little hotel above an Irish Pub. On St. Patrick’s Day nonetheless, which was cool.

We figured that since we were in Wentworth Falls and had a few hours to kill before dinner we should at least go to check out these alleged falls, and conveniently there was a trail that led from right next to our hotel down to the falls.

Let me tell you about hiking the Darwin trail in the rain:

PROS:
1) No spiderwebs across the trail.
2) Did not get bitten by snakes.

CONS:
1) Got soaking wet despite my craptastic gore-tex jacket that can just go fuck itself already.
2) Had to take four lateral steps for every one forward to avoid the mud.
3) Was following Erika who is about a hundred pounds lighter than me, meaning she just skips over ground that I sink up to my ankles in.
4) Being at the bottom of a ravine with houses on either side the entire way, which is an oh-so magical experience.
5) Getting slapped in the face like a Japanese game show contestant every 8 steps by some spring-loaded Eucalyptus tree that is trying to violently moisturize my face.

To say my expectations were low when we finally got there after an hour and a half of hiking would be an understatement. And then we were rewarded with this: 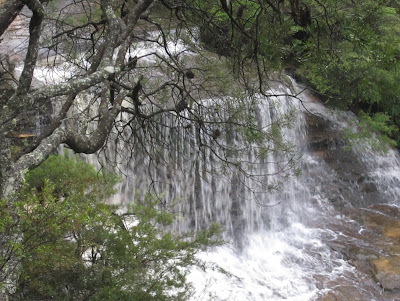 Wait, let me put Erika into the shot so you have some perspective of scale: 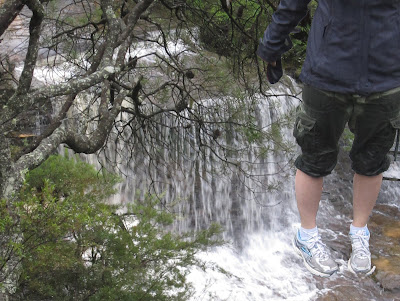 Not exactly worth our effort. Dejected, we set off to return home. Along the way though, we saw a sign that said there was a scenic view ahead. Or we could walk to the carpark and call it a day. We figured meh, what the hell. Let’s check out the view.

And that’s when I dropped my asshole off a cliff: 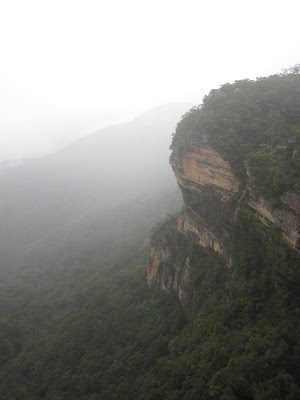 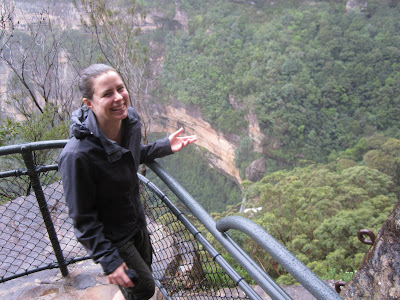 Oh yeah, and those waterfalls? Apparently that was the Weeping Rock. This is Wentworth Falls: 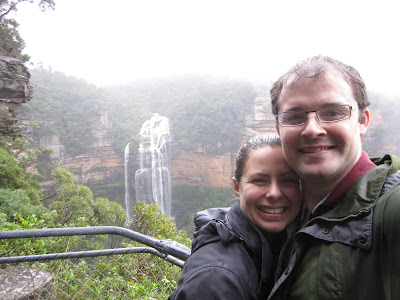 So, yeah. Maybe I shouldn’t be so quick to jump to ornery conclusions.

By the way, you should check out the YouTube video I made, just follow this link. It does a WAY better job of expressing the scale of what we saw, although to be honest nothing can match the real thing. It was friggen amazing.


AND NOW A COMPLETE TANGENT:
You know what else is awesome? Eating at IKEA. You can jam back a plate of meatballs and mashed potatoes for $6, and you can even get them to substitute extra lindenberry sauce instead of the disgusting gravy. And that’s not all… hot dogs are a dollar! A freaking dollar! If this place were in walking distance I’d probably jam back an average of 12 hot dogs per week. Not only would I save money but the nitrates would likely preserve me so well that I’d live past the century mark. Top it off with a 50 cent ice cream cone and you’re golden.

For the record, I’ve never eaten a plate of meatballs & mashed potatoes, a hot dog, and an ice cream cone in the same visit. And a piece of schnitzel. And bought a half kilo of chocolate for $5, which would be a great deal if that happened. It’s all lies and conjecture if Erika tells you otherwise.


More visitors, as Erika’s grad school friends Amelia and Daniel, with their kids Cailin (Kaylen? Caylen? K’aylin?) and Hannah! And these one’s don’t even live in Australia!