Where Humour Comes From

I think I’ve been relying on ranting too much as a source of humour for this blog and as a result have come across as a bit too negative about our experience down here, particularly given how many people are sending messages of a “don’t worry, it’ll get better!” nature. We’re actually having a really good time so far, and with our place all set up now we’ll be able to turn some of our downtime energies towards exploration and entertainment. It’s just that... well, most humour at its root is complaining. Think about it:

Seinfeld: “What’s the deal with…?”

Chris Rock: “You know what the problem is with…?”

Not to mention the gazillion sitcoms that revolve around insecurity, which is essentially complaining about yourself. In general, nice and happy just isn’t all that funny. You need some sort of oomph to push a good joke forward. Now granted this isn’t a universal rule, not all humour needs to be complaining. For instance: Australians want nothing more than to stop for you at the crosswalk. It doesn’t matter where, when, what time of day… they will slam that car to a halt for you in seconds, waving you across with smoke still streaming from their tires. The other day I walked up to the crosswalk and this guy was roaring down the street. He saw that he wasn’t going to be able to stop in time so in desperation he jammed on his brakes and jerked his car into a truck full of kittens. I think his last living act was to wave me across. True story.

That said, I generally do find that if you throw complaining into an otherwise boring anecdote you can really start mining some comedy. In the interest of proving my point I’ve taken the liberty of providing some examples:

Story #1:
Up the street from us there’s an avocado tree, which is awesome because I love avocados and if they’re growing on a tree I get them for free. Just one of the things I love about our place. (Great story right? Not really) 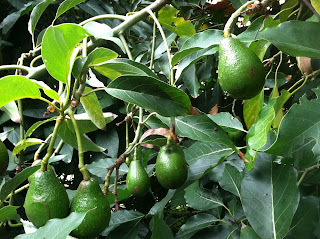 Does anyone have any idea how to tell when an avocado is ready to be picked? I want to pick some of these avocadoes but I’m at a total loss: avocadoes are green when they start growing, green when they’re ready to be picked, green when they’re ripe to eat, and green when they’re past their prime. They spend their entire lives looking exactly the same. Not to mention there’s a 45 minute window where they transition from “Pre-Judge Dredd Stallone abs” to “Bat guano jammed inside shoe leather”; if you don’t grab them somewhere in that timeframe they’re pretty much inedible. Granted you could bludgeon a cow to death with the ones currently on the tree, so I’ve probably got a little waiting to do.

Story #2:
We live in a really pleasant neighborhood with a good mix of folk. It’s not uncommon to wander past a guy in a suit, then a girl with hair dyed pink, and then a young family taking a stroll.

Ok. I get it. Babies require a ton of stuff to keep them alive. It’s not the 1970’s and nobody carts their kid around in a stroller that folds up smaller than an umbrella anymore. But when you’re already marching around with your kid in a stroller the size of a pregnant rhino do you really need the extra coffee holder that juts an extra 6 inches off the side? I just want to get past you without doing the steeple chase through an adjacent café!

Story #3:
The University here is really quite beautiful. It has a much more British flair to it than what we’re accustomed to in North America – very well-manicured lawns and majestic stone buildings. It’s kind of neat to see the cricket pitches all over the place as well. I’m sure Erika will enjoy working there.

Why on god’s green earth would you build a university like a fortress? Honestly, this place is impenetrable. Did Vikings range this far south? Were seaborne samurai a threat from the north? If you’re going to build a University shouldn’t the students be able to navigate it? To illustrate, here is the official campus map, which I assume was passed out to invading forces:

For starters, this map is ungodly hard to read. On top of that, once you go to the school it is also abundantly clear that the map is also totally inaccurate for purposes of navigating the campus. Seeing as how the school of cartography isn’t quite up to snuff, let’s help them get a more accurate representation of the university (click the images for a larger view): 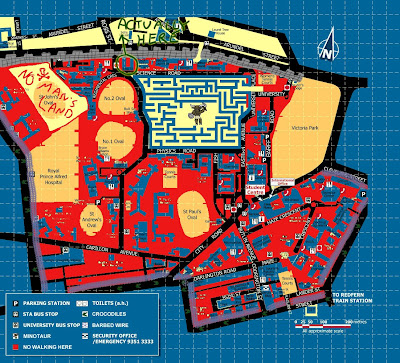 Not only is it virtually impossible to even get into the school, once there you discover that every possible route across campus is cut off. There are no shortcuts, and I’m fairly certain that even if invaders did manage to broach the walls they could just retreat like Russians in winter. I’m surprised anyone even graduates.

So don’t fret folks, the moral of the story is that Sydney is great. We’re having a good time so far, and even though it’s been a torrential downpour the last couple of days it’s still warm enough to sit on the deck and watch it fall, and cools things down enough to sleep well at night. What’s to complain about? Well… there is the internet. Who gives an install window of 1-20 days for crying out loud!