ANZAC stands for “Australia New Zealand Army Corps”. This was the combined military of Australia and New Zealand that fought together during the First World War. This is the only time their militaries have ever fought as a single force and ANZAC Day is celebrated in both countries as their day of remembrance. You’ll see a lot of things around Australia titled “ANZAC” in the same place where we’d use the word “Memorial”. Hospitals, bridges; that sort of thing. On Remembrance Day in Canada it’s a pretty solemn affair. There’s services for the fallen, poppies, and military parades. In Australia you get turbosmashed* and gamble.

It’s pretty fair to say this caught Erika and I off-guard. We were thinking “Hmm… is there a service we should be going to? I wonder what people do.” Then we got this flyer from our local pub:

First off, I want to make it clear that I’m not being critical of the way Aussies celebrate their remembrance. Every culture has their own way of doing it and I think it all boils down to whether the soldiers are on board. Which it seems they are. So I’m not one to judge. Heck, in the US they go camping on Memorial Day.

That said, let’s break down a couple parts of this flyer that I think are fantastic:


Nothing kicks off a day of drinking like liquor and coffee!

I'm also wholly on-board with annual celebratory sporting events. You have to respect the irony of pitting an Aussie team against a New Zealand team on the day to commemorate their unity in war though, right? Maybe it's just me.

In case you didn't notice: "Wear your Family Medals 1st DRINK on us".

AUSSIE:    Can I wear one of your medals for ANZAC Day?

GRAMPA:  What!? Why would I let you do a damn fool thing like that?

AUSSIE:    I'll get a free beer. How about your Commendation for Brave Conduct?

GRAMPA:  I didn't get shot in the ass so you could get a free beer. Here, take this if it's that important to you.

AUSSIE:    A Queen Elizabeth II Coronation Medal? I'll be lucky if they make me a Cosmo with this!

GRAMPA:  You want the free drink or not?

I don't even want to hazard a guess at what "ANZAC Theme Dress" consists of. 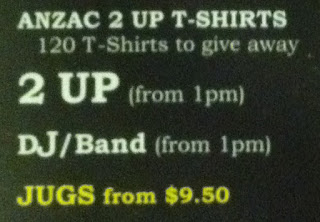 How awesome is this! It's a special ANZAC Day degenerate gambling game! You know what's best about it? It's only legal on ANZAC Day! Yes, for 364 days a year this game is considered a destructive level of gambling, and this in a country where every pub has slot machines and racetrack betting. Technically the games are supposed to be for charity but, well, c'mon people. Apparently the soldiers in the trenches would play Two Up to pass the time (I assume for charity as well), and thus it is allowed out of respect to the soldiers. In case you hadn't noticed, I think this is the greatest thing ever.

Let's end on a respectful note though, since this IS a day of remembrance. When in a foreign culture, it's only right to respect their traditions:

COMPLETE TANGENT:
Why does my computer have 3 volume knobs? There's one for the PC, one for iTunes, and one for my speaker? They all control volume! What's the correct arrangement? Should I max one out and adjust the others? If I put them all to full will that somehow raise the sound to catastrophic levels and damage the foundation of my home? How did we go from "Hit Drum Harder Make Drum Louder" to "Why Won't My Computer Stop Screaming At Me?"

Visitor update #5: B-Rent was in town for business and took Erika and I to dinner, which was awesome. What wasn't awesome was the complete monsoon coupled with Brent's lack of an umbrella. And the fact that he wanted to meet at Nick's Bar and Grill in Cockle Bay but said Nick's Seafood in Darling Harbour. Some things never change. We had a great visit though, good times!
#1: Sylvia
#2: Timmaaaay!
#3: Amelia, Daniel, and family
#4: Martha
#5: B-Rent


*PS: Thanks to Brent for the term “turbosmashed”. I plan on using it excessively.
Posted by Paul_Par at 8:12 PM