We went back to the Blue Mountains (see here for Part 1). Not just because they're awesome, but also because we have some friends who hadn't been there yet. There were also a few things the we hadn't done last time that we thought would be cool.

I guess I should mention who the friends are. We've got some peeps from Dr. Erika's lab that we hang out with on occasion. Alex and Anthea (Canadians), and Dr. Hilke (Belgian). Note that none are Australian. We have nobody here that we regularly hang out with who is Australian. I'm not even sure I can do an Australian accent unless I'm pretending to be a shopkeeper. Even then the majority of shopkeepers aren't Aussies. Where are all the Australians? I actually spent the first two weeks learning how to do a Thai accent before discovering that Australians don't speak like that. True story.

At any rate, we decided to head up to the Blue Mountains... wait. One more aside. We almost ran out of gas. How do you run out of gas with the cumulative weight of education we had in that car! Here's the degree list:

I mean, c'mon people. That's 14 perfectly valid and totally equal academic qualifications in the car and we almost run out of gas? It would have been 15 but Alex is still doing his PhD. Sheesh, I guess I shouldn't be surprised, he was driving after all.

So we head up to the Blue Mountains... whoops. You don't know who any of these travelling academics are. I guess I should provide a photo: 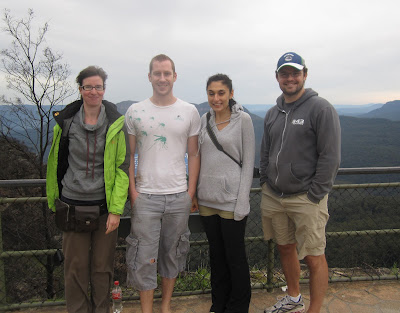 From left to right that's Hilke, Alex, Anthea, and... well, that's me. Erika's not in the shot, and I'm not an academic. Here, I'll just Photoshop her in: 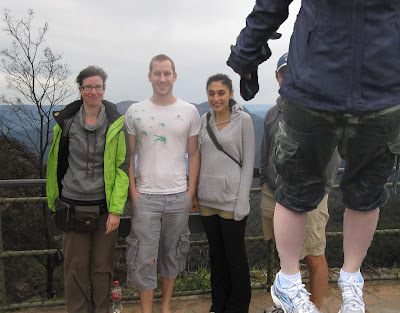 So that's Hilke, Alex, Anthea, and Erika. Much better.

Now on to the Blue Mountains! First off, I think I may have come up short on describing some stuff. For instance, you may recall from last time there was this pretty awesome waterfall: 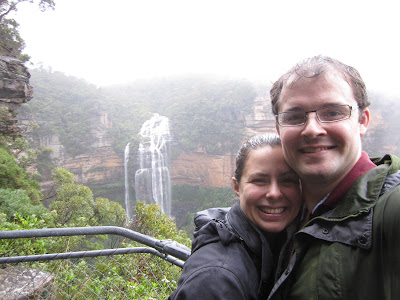 What I failed to capture was this. It looks like a bit of water running off a ledge: 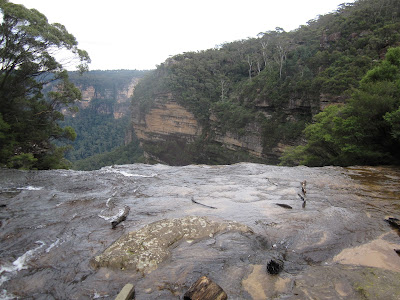 Yeah, well that shot is taken from right here: 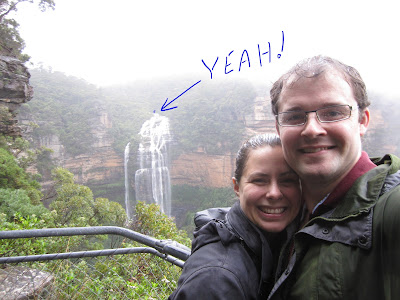 I love it that the only thing blocking you from a colossal drop is some stone steps and a railing: 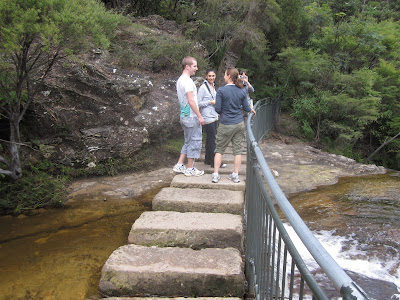 On top of that, this time we were looking forward to going right down to the bottom of the waterfall. It's a long haul, but worth the effort. Right down at the bottom you can cross the waterfall just as it pops over the last ledge: 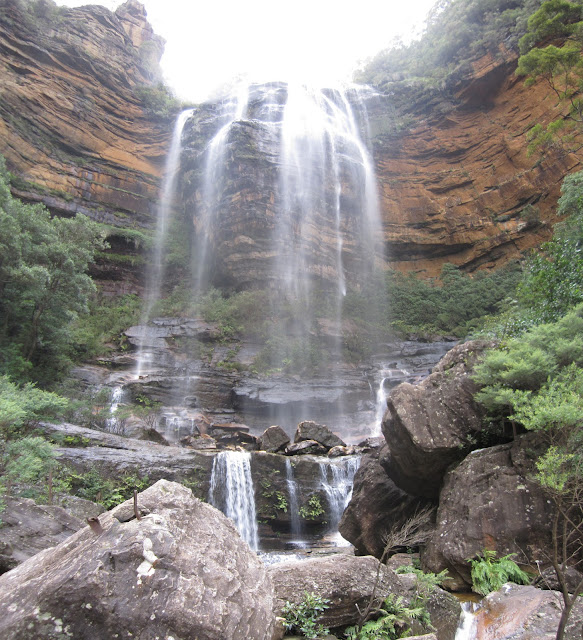 Pretty gorgeous view isn't it? You want to know what a biologist does when they arrive at sights like this? 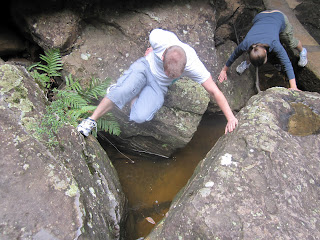 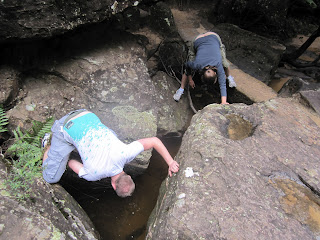 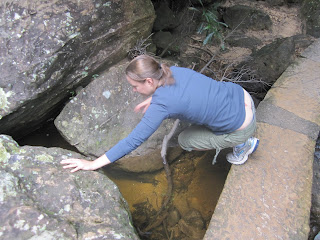 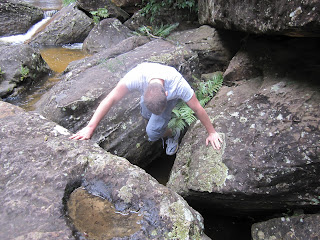 THEY SAW A PRETTY CRAYFISH AND WANTED TO CATCH IT!

Yes, there's this beautiful waterfall forty feet away and instead they were fixated by a small pond and spent 20 minutes trying to catch this: 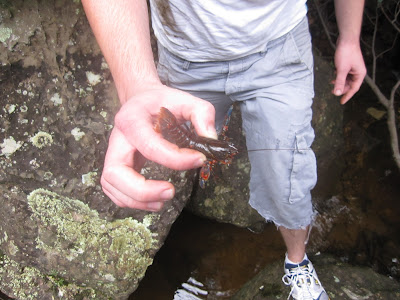 It's colloquially called a Yabby, which means crayfish. In case you wondered. By the way, Alex is a jerk. I have 19 minutes of footage of him contorting himself over this pond and he didn't have the decency to fall in so I could put it on YouTube. Thanks for nothing Alex.

So that was our second visit to the Blue Mountains.


INCOMPLETE TANGENT:
This is an incomplete tangent because it relates to the post in general, but didn't quite fit the overall tone. I also think it might make me a bad person.

We went to a new viewing spot in Katoomba. There was one place we wanted to try because we saw this sign: 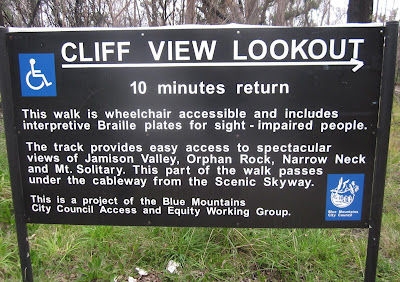 It was well worth it, check out the view: 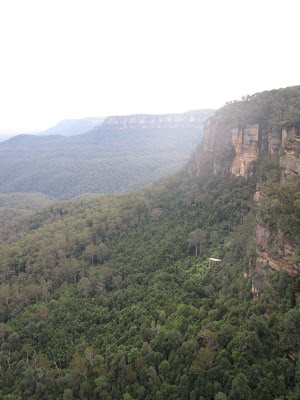 Wait a minute. Let's go back to that sign: 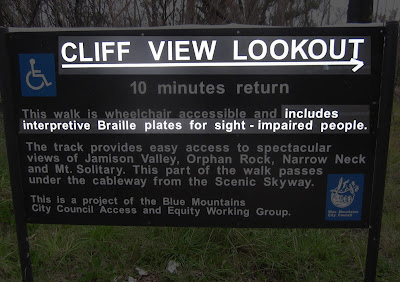 Umm... ok. I guess they'll post signs describing the view? I mean, it kind of feels like taunting but what do I know. 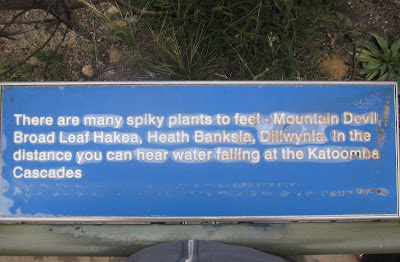 Oh, ok! So they're describing what it is that the blind person is seeing. That actually makes a ton of sense. It would actually let them feel included in the group. Although, I'm not so pumped about this part: 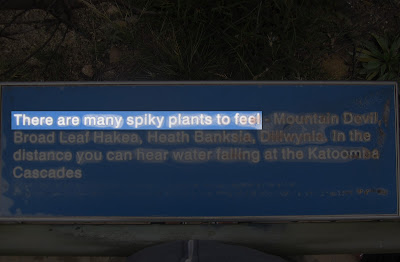 "There are many spiky plants to feel", AKA "Hey blind person! Since you can't see the view why not get stabbed in the hand? That's almost as good."

So, yeah. I'm not sure this was the most well thought-out way to make blind people feel included. If I were blind I'd probably prefer a small carved model of the view over getting spiked in the hand.

But that's just me.