For the Love of God, Someone Please Just Get Me the Internet

Going to be a short post today, and I’m sure you’d like to know why. It's because I’m tired of having to post these things from a pub. Do you know what I said to Erika this morning? I said I would check my email at work. At work! I’ve started to refer to the pub as “work”? That’s unacceptable. WHAT IS SO DAMNED HARD ABOUT GIVING ME THE INTERNET! It’s 2012 for crying out loud. I’m not asking them to breed me winged white rhinos that will fly about the country with packets of ones and zeroes. Just hook me up with the thing that already exists, thank you very much. I’m 100% certain that I would have an easier time getting the internet in rural Afghanistan than in Sydney. I’m also 99.99% certain that the preceding sentence contained no hyperbole.

Can you believe they give a timeframe of 10-20 business days? That’s a month! It’s ludicrous, but I’m patient. I think: “I’m going to wait until I’m entirely justified in screaming my head off” (which I’ve been assured by multiple people is the only way to get internet around here). So I wait. And I call. And the guy says that my request was entered but never processed. Are you kidding me?

PAUL: Are you kidding me?

GUY: Uh, no. We’re really sorry about that. What would you like to do?

PAUL: I want the express 1-3 day setup, and I don’t want to pay for it. I want the internet in my home, this week.

PAUL: So you want me to pay extra to get my internet in 1-3 days when I’ve already waited 20 days? You have to agree with me that’s ridiculous right?

GUY: Umm… I’m going to go talk to someone. Do you mind if I put you on hold?

Please note, that was a week ago and I don’t have internet yet. If it isn’t hooked up by the time the NHL playoffs hit I’m going to head down to the iiNet headquarters and start throwing people off the roof.


COMPLETE TANGENT:
BMO can also go hump a moving Buick for their complete inability to wire money internationally. I’d get more competent service from a room full of monkeys hucking feces at a fax machine. That is all.

It's over. I finally lost it. After a few choice words regarding sex and travel I am now in the search for a new internet company and will probably miss the first round of the playoffs.

I called Erika after getting off the phone with iiNet, still swaddled in rage. We have a rule around here of "no drinking before 5pm" but I asked Erika for an exception. We agreed that this was an appropriate situation for it. She said that I had to limit myself to one glass though, which I did: 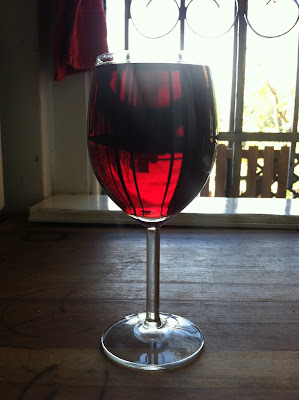 Thank God she didn't ask me to limit myself to a standard drink: 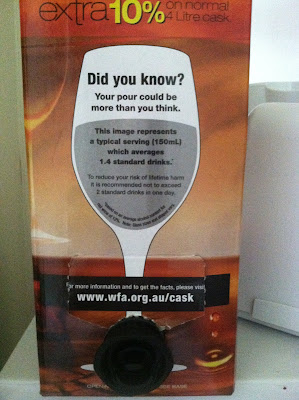 At any rate, this is the last you'll hear from me about the internet. It's not funny anymore.


BTW, if you want the full story here's the email I sent to Paul Cahill, the General Manager of Customer Support for iiNet. I can never resist trying to be a little tongue in cheek, but it's not exactly a humour piece:

I just wanted to send you a note about how catastrophically bad my experience with your company has been since I first signed up. To summarize:

- I signed up, asking for 1-3 day connection

- A month later I still had no connection or contact from your company
- I called and was told that the order had never been processed. It was agreed that I would be given the 1-3 day service for free and half the regular connection waived
- A week later I still had no internet
- I called and was told that they had checked and there was no phone line installed, and that it would be $300 to do so.
- This is ridiculous by the way. I live in quite an old building with established jacks in the walls. The concept of it not having a line makes no sense to me.
- I then asked when this fact was going to be shared with me since nobody had been in contact, to which I was told the technician had been trying to get in touch but was unable to
- I pointed out that I had not received a single email message or phone call from anyone, to which the person on the phone asserted that the tech was right there and had definitely done so. This assertion is tantamount to claiming I was lying, something which I am positive the tech was doing themselves.
- I then proceeded to lose my freaking mind.

Mr. Cahill, I encourage you to listen to the phone calls I placed to your company. Up until the end of the last call I was reasonable and clear headed. When you get to the point where I fly off the handle (something I have never done before) don’t think of it as just an angry guy being angry. Ask yourself “What could my company possibly have done to drive a person to this point?”

I can’t believe the difficulty I have had with your company. I sincerely hope this is the worst customer service I ever experience in my life, it has certainly been so up until this point.