I learned how to scuba dive last week! By the way, this is a special Mother's Day episode of Complete Tangent (even though I'm putting it up on the Monday). Mum, my gift to you was not telling you I went scuba diving last week. I hope you enjoyed your worry-free days.

Yes, my mum would have worried, and so would I. In fact, I did. To be honest, I have never been all that comfortable with the idea of scuba diving. As you all know, I'm quite macho. I've wrestled a few grizzlies in my day, fought a crocodile or two; but hey, who hasn't? Despite that, the idea of going under water away from the sweet breath of life was never something I felt comfortable with.

I do realize that you have a bunch of equipment when you go down, and it's all explicitly designed to keep you alive. There's a lot of it too, as you can see from this diagram: 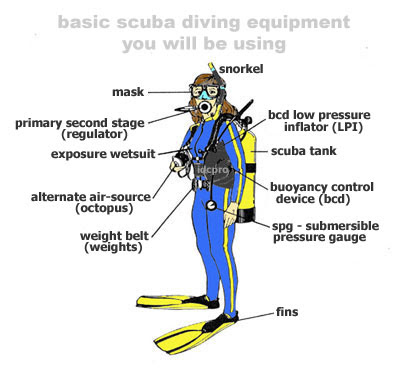 Still, it's one thing to tell someone this gear will help, it's another to actually make them believe it. I mean, when I look at that picture I don't see a bunch of stuff that will keep me alive, I see this: 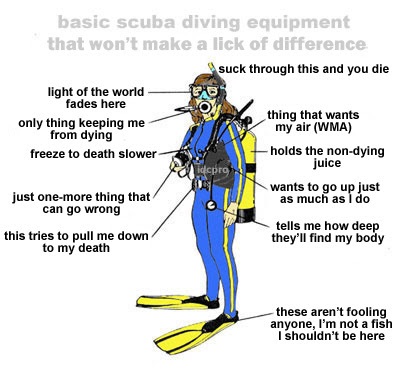 It's safe to say I wasn't entirely bought-in. That said, I pride myself on being someone who can suck it up and look at the numbers, and the numbers say scuba diving is actually quite safe. Add to that the fact that a) Erika is a highly-certified diver and b) We're in one of the best spots in the world to go diving; well it would be a shame not to give it a shot. On top of that I got a deal on the course so it was only around $150 bucks and my cheapness overrode my fear.

That said, it's a 2-day course. When Erika got her PADI Open Water cert it was something like 3-weeks of training. Which is to say that I still had some nerves about the whole thing.

After Day One though, I was... really not thrilled. My chest hurt, I felt nauseated, and didn't really get the impression it was all that interesting to begin with. And I still thought I was going to die the next day. So big win for Day 1! I did admit to myself that I held my breath a bit though, which might explain why I had some chest pain. Oh by the way, they say that the most important thing to remember in diving is that


IF YOU HOLD YOUR BREATH UNDERWATER YOUR LUNGS WILL EXPLODE AND YOU WILL DIE!!!

I'm paraphrasing a little but that's the gist of it. So I'm going to take a bit of the credit for not feeling so hot that night. You'd think I'd have gotten that message.

Fortunately one of the things it says in the PADI manual is not to let a bad day scare you off diving. Sometimes the conditions just aren't right. So I sucked it up (and remembered to exhale) and went to Day 2. I must say that Day 2 was much better. It was a lot easier to chill out in the water, I barely used any of my air, and we actually saw some stuff. This specific stuff actually:

That's Bluey, a Grouper that hangs out at Bare Island in Sydney. It's tough to get a scale of reference so let's just assume he's roughly the size of a Clydesdale horse. Actually he's closer to the size of my leg but wouldn't it be cool if he was the size of a horse? The thing is, there are things the size of a horse, or that are just interesting to look at, or that will eat other animals while you watch. I'm particularly interested in that last one, animals eating animals is just fun. Bluey jammed a sea urchin down his urchin-hole while we watched which was enough to hook me on diving.

I don't know how often we'll go but I'm pumped to go again. I doubt I'll ever shake that 1% feeling that I'm about to die, but logically I do know that I'm more likely to die on the way to the dive site than in the water itself. So I can rely on that logic. Hell, I also feel like I'm going to break my neck every time I go skiing but I still do that too (Side note: How the hell did I ever do judo? People were deliberately trying to hurt me, up to and including cutting my air off to the point that I would pass out. I never batted an eye at that, why would diving bother me?).

So yeah, I'm in on diving now. Next stop, the Great Barrier Reef. AKA, the place where Paul gets eaten by a shark...


COMPLETE TANGENT:
This is legitimately the worst boxed wine on the planet: 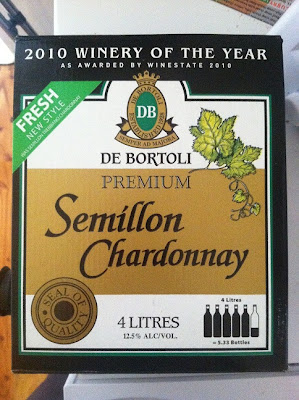 Look, I'm not going to stand up and shout that I was robbed. It's not like there weren't warning signs right there on the box. For instance, "Fresh" shouldn't be a marketing point for wine. Also, I love how they do the math for you on how many bottles of wine are in 4 litres, as though they understand that math isn't a strong suit for their audience. As for their claim of being the "2010 Winery of the Year"? Well, you'll notice that accolade doesn't factor in this box of liquefied rabbit turd. It's the winery that's good, not the swill contained therein. But hey, let's not rule out this ogre piss as being a key factor to the winery's success. Maybe they just extracted all the liquid hate from the rest of the wine and jammed it into these boxes.

Ugh, we barely drank the whole thing.
Posted by Paul_Par at 2:28 PM