What Gets Left Out


Over the last couple of days I have absolutely eviscerated my book to the tune of ten thousand words. TEN. THOUSAND. WORDS. That’s almost 25% of what I’ve written to date.

The thing is, eviscerate is really the wrong word. You see, viscera is basically your guts. So that’s pretty important. Therefore eviscerate means “takin’ out yer guts”, which is a bad thing. What I did to my book wasn't a bad thing though – it was eliminating a bunch of crap that was weighing it down. It’s a much better story now, and I feel pumped about where it’s going. So I didn’t really eviscerate it, I took out extra stuff it didn’t need. I don’t know what to call that. An appendectomy? One where your appendix takes up 25% of your body mass? That’s a pretty good analogy actually, ‘cause if you’ve got a 50 pound appendix you want to get that bad boy out of your viscera ASAP.

I think there are a lot of things in life where the thing left out is really the key to it being successful. Especially in creative fields. I mean, look at Raphael’s famous painting of Pope Julius II: 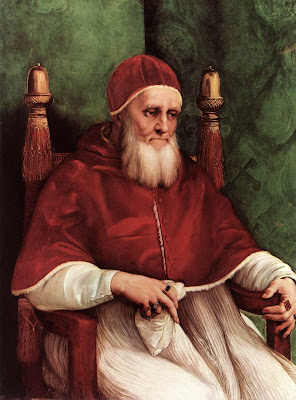 Would it suddenly be better if Raphael been able to finish it? 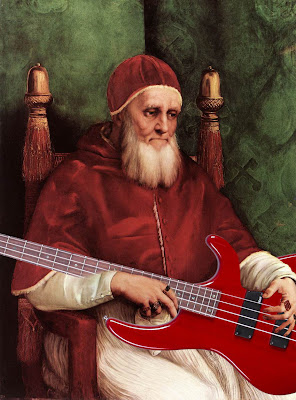 (Side Note A: He must be playing the Blues, it looks like he’s really feeling it.)
(Side Note B: Who knew the Pope was a lefty?)
(Side Note C: Pope Julius II was kind of a dick, so this isn’t as sacrilegious as it looks.)

It’s a creative work so people are going to have varying opinions, but I think Raphael knew what he was doing.

There are lots of other opportunities in life where we should pause to appreciate the things that didn’t happen though, beyond creative works. For instance, did you ever just barely make it to the washroom? How would you feel if you came up short? I argue that you should appreciate actually getting there in time to the same degree you would be angry if you hadn’t pulled it off.

This train of thought got me thinking about the countries I’ve lived in. I’m not sure whether I’ve been more impressed by the facets a country has, or the facets it doesn’t have. It’s probably a semantic difference, but this feels like a great opportunity to make a Pro/Con list comparing Canada, the USA, and Australia:

So yeah… this post didn’t really have a clear thesis statement. Meh, I’m ok with that.


COMPLETE TANGENT:
The downside to writing a blog is that people think they're talking to you a lot. Which isn't really the case since it's sort of a 1-way door. As far as I can tell it, an asteroid has hit Vancouver yet somehow managed to spit my mum's house out into Langley where she miraculously survived.

While I'm pumped about my mum's incredible tale of survival and am probably going to hear about it for years, you peeps can feel free to drop us a line. It'd be great to hear from the folks back home.