I like facebook, it's an experiment in psychology. Just by watching posting style you kind of get a feel for who a person is or where they're at in their lives. Then after a little bit you realize there's only so many kinds of facebook poster, and everyone pretty much fits into one of those categories.

By now you've probably begun to suspect that I'm going to list these different styles of facebook posting and then make jokes about them.

Well you're right! So without further ado, here are the 12 styles of facebook posting. Everyone slots into at least one of these categories, whether they know it or not:


STYLE 1: The Lurker
You know that spot in the upper-right corner of the page? Where it’s just a stream of people who are on facebook? You ever notice the person who has never, ever, posted anything? Yeah, that guy. 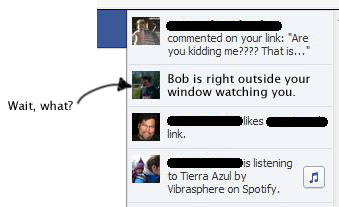 STYLE 2: The Cryptic
The people whose status updates could be anything up to and including: A deeply personal moment, a request for a follow up, a mistyped note, or possibly just poorly translated Hungarian. 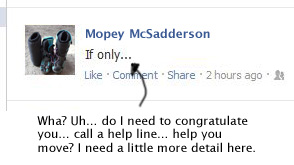 STYLE 3: The Oversharer
The person where you’re left going “WHOA! I could have lived a happy life without ever knowing that.”

STYLE 4: The Linker
Just a nonstop barrage of links to different things. Generally includes at least one LOL Cat and an XKCD Comic.


STYLE 5: The Activist
WON’T SOMEBODY PLEASE THINK OF THE CHILDREN!!! (disclaimer… I’m a little bit this at times) 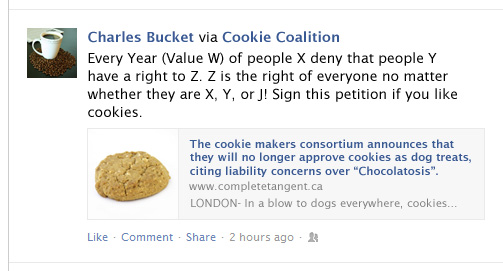 STYLE 6: The Dead Profile
One day they just stopped posting. Nobody mentioned anything happening to them but it's been too long and now you’re afraid to ask. 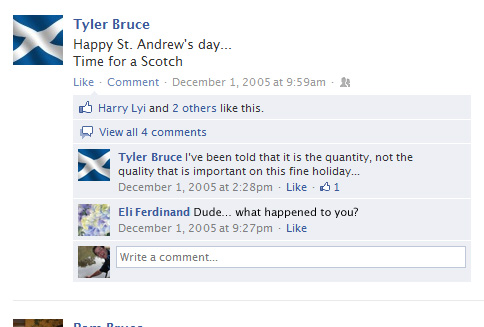 STYLE 7: The Mom-whose-only-means-of-contact-with-the-outside-world-is-Facebook
No picture here… because I’m terrified of them. They are itching for a reason to get away from their kids, and at this point I’m betting that murdering me seems like a good reason. They’d get away with it too… so long as there’s one stay-at-home mom on that jury it’s never coming out unanimous.


STYLE 8: The Networker
19/20 posts are about “some great info they just wanted to pass along”. Uses HootSuite.

STYLE 9: The Emo Venter
Every post sounds like Alanis Morissette lyrics. Also, every joke post I could write would immediately offend someone. You can’t be so over the top that you can top an Emo Venter, it would sound like I’m mocking their angst.


STYLE 10: The Drunk Poster
Really, really shouldn’t do this. 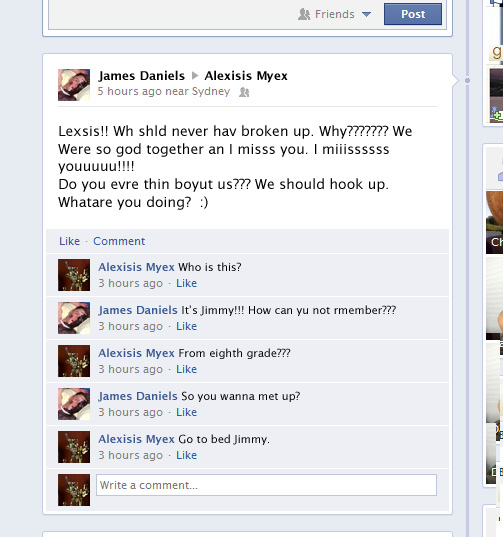 “Did you know that my plants need watering so I can chop some wood in the hopes that my lost cow comes home and I’ll be able to bake some dinner before the customers get angry and I have to run from the mafia? No? Huh... 'cause I could really use the help.”
Side note: I'm just cracking jokes about the facebook games. It’s easy enough to block them if you don’t want to see them so it’s not nearly the issue it was in the early days of facebook, and some of the most interesting things going on in gaming are happening on facebook. 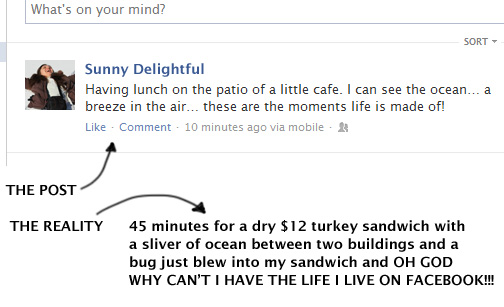 And yes, I realize I have written facebook everywhere, not Facebook. It's lower case on their logo though, so it's kind of a gray area.

COMPLETE TANGENT:
Yesterday we saw Aida at the Sydney Opera House. It was a great show, although Aida really drags in the 3rd act. Clearly that's not the point of the tangent.

Opera is awesome because none - and I mean none - of the things that limit your success in high school have any effect on your opera career. Not that I could see anyway. That stage had skinny people, fat people; black, white, purple people; dancers, and people who could barely move. Dorky, funky, ripped, nerdy... you name it, it was represented. It was a freaking United Nations of folks out there. Granted you've gotta have a banging set of pipes on you, but you're always going to have to bring something to the table.