Signing Your Life Away

You know how when you think of Australia the first thing you think of is deadly animals? Crocs, snakes, spiders, jellyfish... hell, even the large flightless birds have a gigantic claw on their foot that could disembowel a liger.

Well, rest assured that the tourism bureau of Australia is aware of that reputation and desperately hoping to change it. At some point it must have occurred to them that people don't want to go places where they might die and now they're on a mission to downplay the risks associated with the local fauna. For example:

Why don't we look at that again:

What? Crocodile attacks may cause injury? What the hell else would they cause, a hickey? In case you've been living under a rock, this is what a saltwater croc looks like: 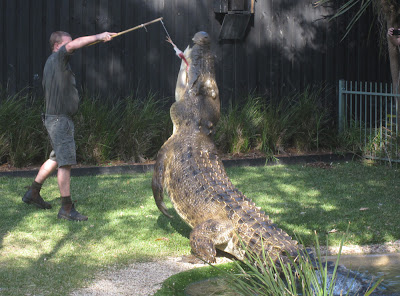 You know what actually might happen if you ignore the sign and get attacked while swimming in croc-infested waters? You might get to think "I've made a terrible mistake" in the half-second before you're dragged under. By the way, they're all over the place in Northern Australia and Queensland and one of those places is named Darwin. I don't think that's an accident.

By the way, any of you wondering how effective that sign was? 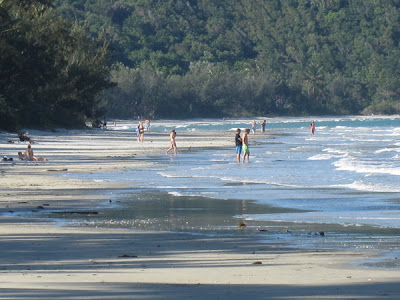 I kid you not, this photo was taken directly on the other side of that sign. Wow. What's going through these people's heads besides sharp teeth? Maybe they don't understand English? From what I've heard it's always German tourists who get eaten and – putting aside the fact that practically every German speaks English – the Australian government has taken rigorous steps to prevent more German chompings:

Look, I'm all for preventing croc attacks on German tourists, but doesn't this sign need to be WAY more forceful? Come on guys, you need something that screams WENN SIE HIER SCHWIMMEN EIN KROKODIL ESSEN SIE! Something like this: 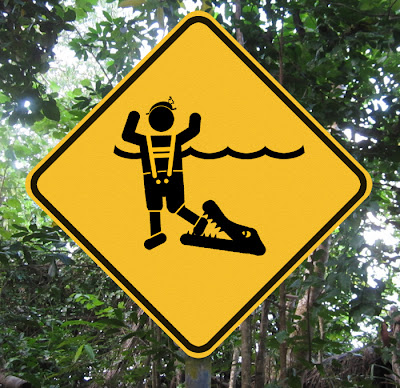 See, I think that gets the point across with authority! Well, if you're German anyway.

At this point I should mention it's not just the risks of crocodiles that are getting downplayed. Check out this gem (which was an actual sign at the beach): 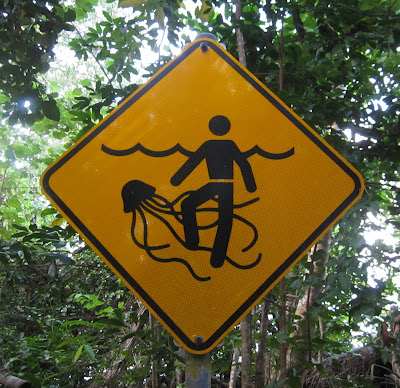 Ok, I get it. Jellyfish, oh no! But what does that really mean?

That's a lot of text and I want to go swimming. Just tell me if they're dangerous or not.

Oh. Well that does sound bad. I don't like excruciating pain, and death is super inconvenient. Surely there are steps I can take if I should happen to be stung?

Uh, "Treatment involves liberal drenching with vinegar and cardio-pulmonary resuscitation." What? You can't give someone medical care advice that leaps directly from "vigorously rub fish and chips into the wound" all the way to "get yourself hooked up to an artificial lung ASAP!" Shouldn't there be some intermediate steps along the way? Maybe slap them around a little, give 'em a shot of whiskey? That kind of thing. I mean... sweet merciful crap. Shouldn't you be a bit more forceful than "Avoid a painful encounter" when you've got news like this to share?

That said, the dangerous animals of Australia are a national treasure. If you get killed by a crocodile or a box jellyfish there's a pretty good chance it was your fault. And while Cassowaries are dangerous, it's usually the ones who've been fed by humans that end up attacking people. So maybe it wasn't your fault, but it was a person who screwed the animal up all the same.

In fact, people are a bigger threat to Cassowaries than they are to us. The bird is critically endangered and they lose dozens to roadkill incidents every year. That's why you see signs like this around: 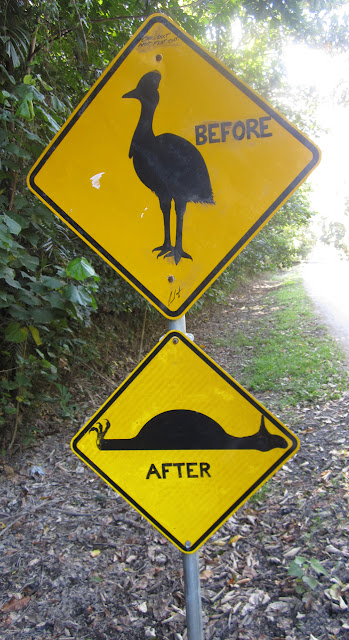 Actually that's, um... that's kind of a crappy sign. The top part is fine, but the one on the bottom is a bit budget, isn't it? It looks like Homer Simpson passed out after a costume party. Come to think of it, it reminds me of something else too... 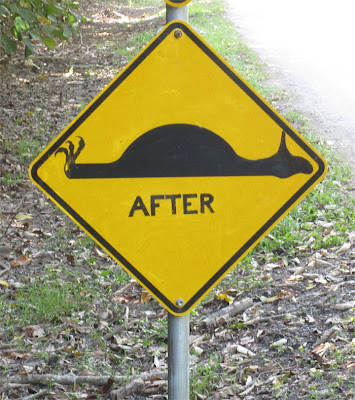 What could it possible be... 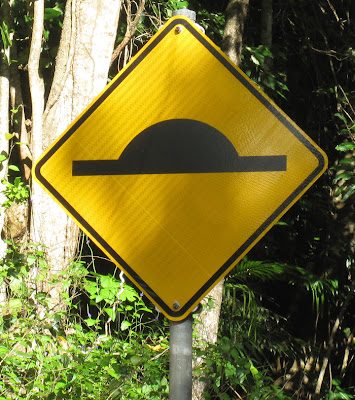 Oh come on guys. Really? You have this crazily endangered awesome bird and you try to save a few bucks by repainting speedbump signs to portray a dead Cassowary? Are you joking? 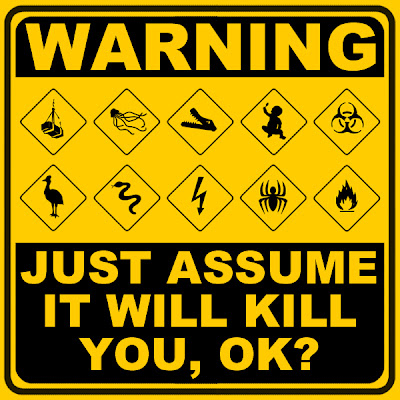 COMPLETE TANGENT:
I was ranting up a nice stream of righteous indignation about Australians chopping down their rainforest to put up fields of sugarcane and cattle farms when I realized I was eating a cheeseburger and drinking a coke at the time. So I may have been premature in my critique.
Posted by Paul_Par at 3:39 AM