I should have been a weatherman. Weatherperson? Maybe that's what you're supposed to say but I'm a guy as well as a person soooo... I'm sticking with weatherman. When describing myself anyway. I'll do my best to be politically correct elsewhere.

Anyhoo, I bet you I could do that job with no training whatsoever and there wouldn't be a noticeable difference between my forecasts and anyone else's. Now don't get me wrong; there's lots of stuff weatherpeople do. Nimbuses and clouds and pressure and prevailing winds and stuff. Plus the radar and thingys. Heck, they even have something in Seattle called "double doppler radar" that they're very proud of, despite the fact that it sounds porn-related.

The thing is, weathermammals do a crap-ton of work to get 5% more accuracy than looking at a calendar and glancing out the window before saying "Hmm... looks like rain. Bet tomorrow will be rainy too." Oh sure, there's long-term forecasts but those would be easy enough to deal with. I'd just always predict moderate to poor weather for the weekend. That way anyone who got upset when they saw the forecast would be pleasantly surprised, instead of angry that the weather didn't go the way they wanted it to. Simple. As for other days? Well c'mon, how hard is this to predict: 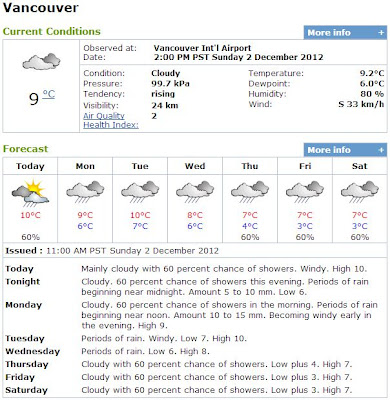 Cloudy with a 60% chance of showers? Way to go out on a limb there guys. "Meh... it'll either rain or it won't." Not exactly something you can plan a golf trip around. And for crying out loud, is there an easier place in the world to predict the weather in than Vancouver? Africa during monsoon season? Summer in the Sahara? Winter in Antarctica? "Here's your forecast for McMurdo Station: Go outside for ten minutes and your balls will fall off. In other news..."

Anyway, I think I could pull it off without anyone noticing.


COMPLETE TANGENT:
I wish companies hadn't gotten all bacon-ey and started jamming it into everything under the sun. Bacon was better when it was the stealth awesome ingredient. Now it's a little less awesome.

Bacon is the indie band of food groups.
Posted by Paul_Par at 7:53 AM