Note: I'm not completely insane, so please don't read this post under the belief that I'm somehow arguing in favour of anything other than rational thought.

Can we chat, just for a moment, about guns?

The recent shootings in the US have been brutal. Absolutely, unabashedly, brutal. When something like that happens it's a wake-up call for an entire culture... a chance to ask "Are we doing it right? How could we do it better?"

It's good to know they've come up with a solution: 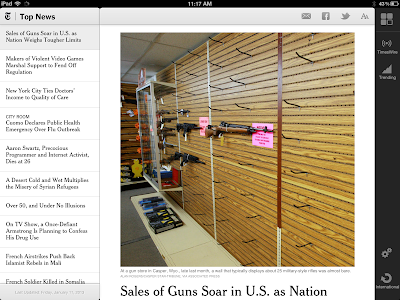 I'm going to zoom in on that top left corner for clarity's sake: 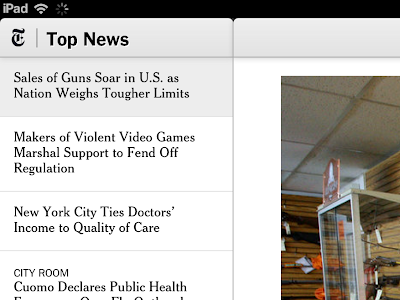 Yes, that's right. Guns aren't the problem in these shootings. Video games are the problem.

What? How the hell does that work? Seriously, this was the front page of the NY Times for Sunday, January 13th. Apparently in the US, while people were racing out to buy automatic weapons in fear of laws that might happen, they were busy pointing the finger at video games because, hey, some of those shooters played video games (and yes, I'm going to quote extensively from that article).

Look, I know a lot of people want a scapegoat here. But in this instance I'm going with the tiny shards of metal travelling at the speed of sound over a bunch of images on a television. For crying out loud, there's a real opportunity here... who could possibly benefit from deflecting the argument away from guns?

"...public rhetoric has clearly shifted since the shootings, with politicians and even the National Rifle Association — normally a fan of shooting games — quick to blame video games and Hollywood movies for inuring children to violence."

Oh. So you're telling me that after a bunch of people get killed with guns the NRA is pointing the finger at video games? You think they don't have a horse in this race? Folks, that's like the liquor industry arguing that the most effective way to combat drunk driving is to regulate milk. A little critical thought would be nice.

One of the problems here is that lawmakers don't know their ass from a teakettle when it comes to games. They simply say "violent video games" without really understanding what that means. For instance:

"There have been reports that Mr. Blah Blah*, the Newtown gunman who killed himself after his rampage, liked World of Warcraft and other violent games, as do many young men."

Whoah, hold on... what the hell just happened there? What was the point of the "as do many young men" part of that sentence? Are you saying the guy is like many other young men, so don't blow the games thing out of context? Or are you intimating that there's a whole bunch of young men out there who are potential killers? Christ... you went to journalism school, didn't you? A little clarity would be nice.

Back to my original point, which was the part about how he "liked World of Warcraft and other violent games." Uhhh... anyone out there actually seen what WoW looks like? 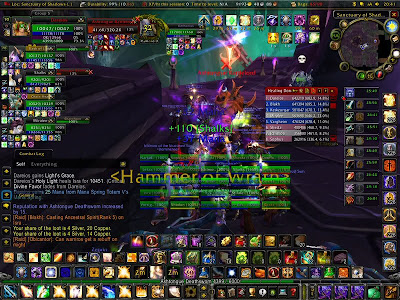 Yeah, that's a regular murder simulator you're got there. If there's a way to sub-menu a person to death, this guy's primed to do it.

Come on. Please educate yourself on the issue.

"Studies on the impact of gaming violence offer conflicting evidence. But science aside..."

Sigh. This quote says so much. "You can have your science, but what you should really be listening to is my gut instinct..."

"Residents in Southington, Conn., 30 miles northeast of Newtown, went so far as to organize a rally to destroy violent games. (The event was canceled this week.)"

Well at least we didn't get all the way to book burning.

“I don’t let games like Call of Duty in my house,” Gov. Chris Christie of New Jersey said this week on MSNBC. “You cannot tell me that a kid sitting in a basement for hours playing Call of Duty and killing people over and over and over again does not desensitize that child to the real-life effects of violence.”

THAT'S WHY THERE'S A MATURE RATING ON THE BOX!!! WE'RE TELLING YOU NOT TO LET YOUR KID PLAY IT!!! Congratulations for being a parent who can read. No, really, bravo. By the way, you know who puts those ratings on the box? The games industry. And they did it on their own. You think that happened with films? FYI, the average age of a gamer is 35. It's not like they're shipping a free copy of Call of Duty and a package of Marlboro's with every Super Mario Brothers sale. Oh, and by the way:

"2009 research by the Federal Trade Commission [credited] game makers for going further than any other media group to shield children from inappropriate material. Major retailers like GameStop consistently refused to sell “mature” rated games to minors, the commission found, and game makers usually did not market them to children."

So yeah, there's that. We're deliberately trying not to put violent games in the hands of kids. The only thing that can get in our way is crappy parenting, but lord knows that's not going to be part of the argument. By the way... do any of you readers think the games industry has to do any of this? Actually, we don't:

"The industry’s biggest political asset may be the 2011 ruling by the Supreme Court that found restrictions on the sale of video games to be unconstitutional.

Justice Antonin Scalia, writing for the majority, wrote that evidence linking games to violence was unpersuasive and that games had the same legal protection as violent literary classics like Grimm’s Fairy Tales or “Snow White.”"

So here's the summary: There's no conclusive evidence that violent games preclude children towards violent acts, but the games industry regulates itself anyway, even though the US Supreme Court says it doesn't have to. There is evidence however, that when people get shot to death there is a gun involved.

Take this opportunity to fix a problem, America. Don't squander it on rehashing an argument that a) has no scientific basis, b) is already being addressed, and c) has no direct relationship to the problem.

Perhaps surprisingly, the most salient quote in the entire article came from a Texas Republican:

"Representative Kevin Brady, a Texas Republican, suggested that the focus on violent video games is misplaced. He called the games “a healthy form of education and entertainment for our family” and said ratings made it easy to keep inappropriate games from his children."

*I don't think that splashing the media with the names of these mass murderers does anything to help the problem. In fact, I think it's partially why they do it; to gain a measure of fame in compensation for a life of anonymity. I'll be damned if I'm going to contribute by putting the guy's name in my blog.


COMPLETE TANGENT:
Why is it that so many people don't remove the foil from packages of dip, cream cheese, sour cream, etc? They just kind of open it halfway and then leave the rest attached so that it stays there when they put the lid on, forcing them to laterally excavate dip from under the foil like a coal miner. Does that foil have some sort of magical properties I'm unaware of? Just remove the foil and enjoy unencumbered dip access!
Posted by Paul_Par at 9:32 AM